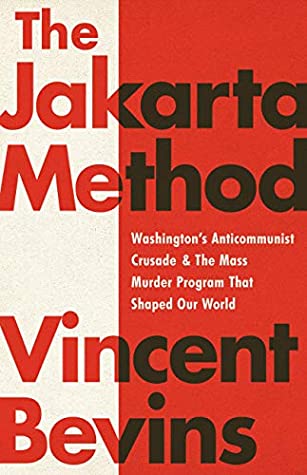 I grew up in Indonesia, to Chinese Indonesian parents. As such I considered myself fairly knowledgeable about the events that shook my country in 1965 – the alleged Communist coup, the “counter-coup” that brought Gen. Suharto to power, the ban on any Chinese cultural expression - from Chinese-language books to having Chinese names. If you are familiar with Chinese surnames you can probably decipher mine and figure out what my original surname was!

Even with that background, this book is still an eye-opener. Partly because of the author being able to reference newly-declassified documents, partly because he managed to interview so many victims of the mass persecution of alleged Communists and leftists that took place in 1965-6 (and later in 1975 after Indonesia invaded East Timor). But also, most importantly, because he weaved a master narrative connecting events in Indonesia to previous Western intelligence interventions – in Iran and Guatemala – as well as later interventions in South East Asia and Latin America; in the latter region Jakarta became synonymous with right-wing militaristic suppression of leftists, including disappearing them for added terror.

It is published at a very opportune time, when a right-wing authoritarian movement seems ascendant in many countries - capturing the Presidency in the United States, Brazil, and the Philippines; the premiership in India and Hungary; and getting stronger in many others including France and, hello again, Indonesia. Indonesia, the country where we never come to grips with our past, where an attempt at a truth and reconciliation process was quashed, and there is still strong villification of the left and even of liberals.

Similar to how religious mythologies often bear striking parallels to each other, it is quite striking how the alleged events of the night of September 30, 1965 in Indonesia parallel the alleged incident in Brazil in 1935 that became the foundational myth of that country’s anti-communist movement. Likewise, the CIA’s predilection for funding Islamists – a policy that backfired most spectacularly with 9/11 – turns out to be deep-rooted; the book described them secretly funding a political party in Indonesia in the 1950s.

One wonders what the decolonized Third World would look like, had its countries been free to develop along their own paths. More secular and left leaning, and perhaps even more democratic? The author made a suggestion that the turn to authoritarianism among surviving socialist regimes is likely a reaction to the massacre of peaceful socialist and communist parties in Indonesia and Chile.

It often struck me how in many ways, Indonesia is a poor copy of the United States - both post-colonial states, both more religious than their counterparts, both with costly military operations within and outside of their borders. It turns out that the similarities might be less coincidental than I first thought.

In a world where colonialism is dead, but neoliberalism and globalization (and increasingly, large corporations calling the shots) being eerily similar to deposed Indonesian President Sukarno’s criticism of neocolonialism, it is more imperative than ever to learn from our history. As Santayana said, those who cannot remember the past are condemned to repeat it.

I highly recommend this book. The prose can be a bit odd at times – this book feels to me like a non-fictional 1984, if you catch my drift – but it does not detract from the reading experience. I finished it over 11 days of mostly bedtime reading!

This post is day 2 of my #100DaysToOffload challenge. Visit https://100daystooffload.com to get more info, or to get involved.