Book Review: To Be Taught, If Fortunate by Becky Chambers 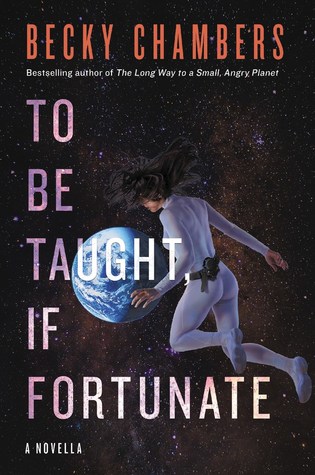 TL;DR a very enjoyable read for the Fediverse #SFFBookClub; I breezed through it in only four days.

This novella is set in the near future where the climate crisis is leading to societal breakdown; with governments now overwhelmed, space exploration is led by the citizen-funded Open Cluster Astronautics and its Lawki crewed missions to extrasolar planets.

We follow the journey of the sixth such Lawki mission, as narrated by flight engineer Ariadne O’Neill, narrating a final transmission that seemed a bit premonitive; it’s not until much later in the book that the details of what happened slowly unfolds. As this is the first book I read in the author’s larger Wayfarer universe, it is more of a suspense for me than to someone who has read even the first Wayfarer book (The Long Way to a Small, Angry Planet) - but even knowing the bigger picture, it still leaves enough questions to maintain the suspense.

The universe it sets is interesting, a mix of optimism (when it comes to extrasolar life, or the technological development needed to achieve human spaceflight at a significant percentage of light speed, or somaforming) – and pessimism (too much of a spoiler though). I was certainly not expecting there being no major glitch with the spacecraft, or that all the extrasolar bodies they explored actually contain lifeforms - and four such orbiting the same star!

As Q noted in his review, somaforming could have been explored in more details. It felt a bit deus ex machina - something that helps you adapt to the environment and works seamlessly, and yet somehow causes no psychological effect or no physical effect (reflection etc.) that affect the mission.

Otherwise, the dynamics between the crew members are quite fascinating. In contrast to current (relatively much shorter-term) space missions, where fraternatizing is neither encouraged, we are treated to a rich interplay between various human sexuality expressions. Although, here, again, it seems a tad bit optimistic in that it caused less friction than I would expect.

Overall, I highly recommend this book. The writing style is so good (I’m starting the first Wayfarer book now, and actually prefer the writing style in this novella), that I don’t even question the idiosyncrasies until the end, probably triggered by a jarring distance miscalculation. Even with the open-ended ending (only partially resolved by knowing the Wayfarer universe), it leaves you feeling hopeful and satisfied… and impressed.

This post is day 11 of my #100DaysToOffload challenge. Visit https://100daystooffload.com to get more info, or to get involved.